The short answer is NO!

The construction of a high-resolution backscatter mosaic starts with acquiring backscatter data with a multibeam sonar.  Then, this data goes through several post-survey processing steps, one of which is called “normalization” (or “cross-track normalization” to be precise).

Indeed, there are cross-track variations in the amplitude of the backscatter, which are caused by:

The normalization process gets rid of cross-track variations by removing the angular dependence of the acoustic backscatter for off-nadir returns, while maintaining spatial changes in the backscatter amplitudes that could indicate differences in the morphology of the seafloor.

It is important to notice that, to date, there are no universally accepted methods for making “normalization” corrections.

The normalization step is included in several commercial post-processing software, and although it is difficult to explain the differences between each of them because the techniques used are proprietary and not disclosed, they all deliver mosaics that are pleasing to the eye and useful for pinpointing differences in the character of the seafloor.

Such results are NOT dependent on whether the backscatter data is calibrated or not.

How does the normalization work?

As mentioned earlier, the reason for “normalizing” relies on the fact that the backscatter amplitudes vary with the off-nadir angle.  The following figure illustrates this variation by representing the backscatter strength across off-nadir angles ranging from 0° to 80° for four different types of bottom: rock, pea gravel, fine sand and silt. 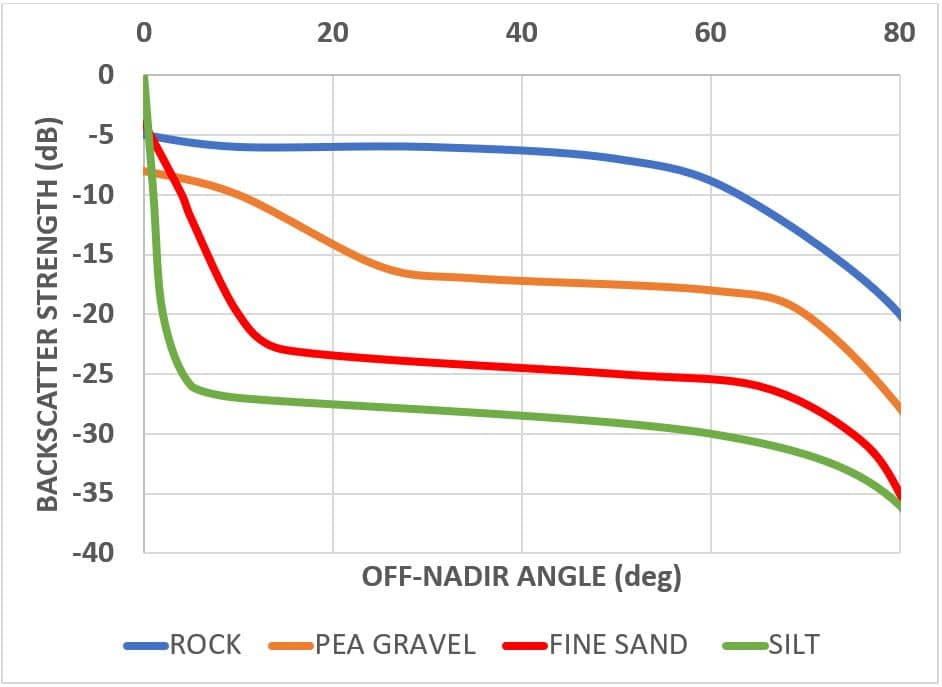 Backscatter Strength by Type of Bottom

Three bands can be differentiated:

The “normalization” assumes that for the area surveyed, the particulars of the seafloor are uniform.  This assumption justifies using this data to develop a baseline angular response function, which is multibeam echosounder-specific and location-specific.  Because the baseline angular response is defined for a specific area surveyed and with a specific multibeam sonar, it can be said that it is also dependent on the operating frequency of the multibeam echosounder.

This scheme for normalization of multibeam backscatter replaces the angle-dependent backscatter with backscatter values that are independent from the off-nadir angle.

As a result, at times, the mosaic shows stripes that come from assuming that the baseline function adequately represents the totality of the properties of the seafloor in a given survey area.

A mosaic of a normalized backscatter presents spatial variations in the backscatter strength under the imaginary circumstance that each and every backscatter data represented in the mosaic was acquired at an angle in the “central plateau” in the baseline function.

“Ideally and unfortunately, directly removing off-nadir angular dependence of acoustic backscatter requires that one knows much more information about the seafloor than is likely to be available.”, indicates Lloyd Huff, former Research Professor at University of New Hampshire and Researcher at NOAA

Are calibrated MBES backscatter data necessary for the construction of mosaics that are both pleasing to the eye and useful for pinpointing changes in the character of the seafloor?
Share on: