A guide to making the right technology investment

Investment in the right equipment is critical for every surveyor. Here, we list the main differences between interferometric side scan sonars (also referred to as bathymetric side scans) and beamforming multibeam echosounder systems (MBES), helping you make the right technology investment.

Please note: the below table refers to typical sonar configurations

1. Number of beams and resolution

MBES can deliver exception resolution thanks to:

With each sounding calculated as the average of each beam’s unique footprint, soundings are characterized by magnitude, phase and angle, providing accurate and detailed information about the intensity and geolocation of every return. Thanks to sophisticated beam-focusing technology, MBES are able to produce accurate surveys even in shallow water.

In contrast, interferometric sonars usually operate using only a single beam per transducer (one beam to port and one beam to starboard).  For each range, they measure the sum of all returns on each side. They are therefore unable to provide highly accurate geolocation of returns and can be highly sensitive to noise and multipath.  In addition, interferometric side scan sonars rely on the position of shadows to determine the angle of a target and therefore returns an approximated value.

The graph below shows that for a specific range r, the interferometric side scan sonar registers the amplitude of all returns.

Also, interferometric side scan sonars, don’t have beam focusing capabilities, and therefore can not deliver accurate measurements in shallow waters.

Interferometric side scan sonars operate using two transducers, and therefore can be considered a dual head system. When compared to dual head MBES, swaths have similar widths. In general, interferometric side scan sonars offer 200⁰ swath widths, while dual-head MBES ensure approximately 300⁰ (because the swaths of each transducer slightly overlap at nadir).

In contrast, as mentioned, for each range, interferometric sonars measure the sum of all returns to calculate the location of targets.  At nadir, all returns have an incident angle close to 90⁰, and as a result, there is negligible time difference between each return, making it impossible to discriminate them. It creates a blind spot in the nadir area.

The graph below shows that the sum of all returns at nadir are recorded as a short pulse in the time series.  No information of the area at nadir is actually recorded. 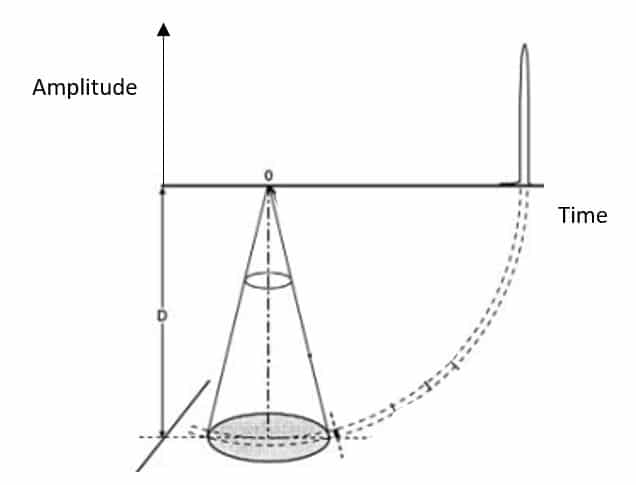 To overcome this limitation, hydrographers must overlap the survey lines 100% to ensure full coverage of the area surveyed.

The image below is a good example of the nadir gap that exists when surveying with an interferometric side scan sonar. 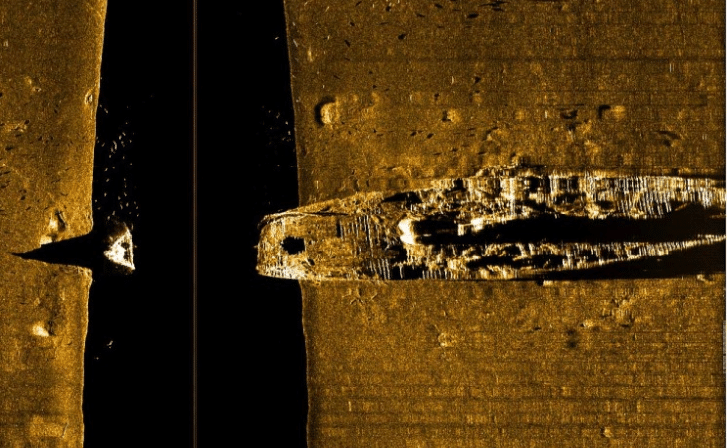 Because every MBES sounding is characterized by magnitude, phase and angle, MBES systems are able to discriminate every return and therefore are able to report vertical underwater features accurately.

In contrast, interferometric systems are unable to distinguish between acoustic returns arriving from different angles at the same range.  For example, side scan sonar can not discriminate returns from vertical walls or vertical features (piles, objects, etc.), as they all have different angles but the same range.  Interferometric side scan sonar are not suited for mapping vertical features which is critical for ensuring safety of navigation.  It is also widely used in marine construction projects.

In general, interferometric acoustic data improves as the acoustic return incident angle decreases, which means that the integrity of acoustic returns improves towards the outer edges of the sector. However, the integrity of the data collected at the outer swath areas is entirely dependent on the ability to record accurately the vessel’s motion (heave, pitch, roll) and water column sound velocity corrections. It can be challenging to adequately correct for motion, especially roll, at swath coverage beyond 6x times water depth. The result is often poor quality data collection for outer beams.

MBES systems are designed for exceptional performance across a wide range of applications and are excellent for mapping irregular seafloors with high resolution, across a broad range of bathymetry requirements.

While interferometric sonars can be highly effective for imaging, their technical limitations mean they are often more suited for obstacle detection.  The size and shape of those objects are typically estimated by analyzing the size of their shadows.  It is very common to tow interferometric side scan sonars near the seabed since by doing so, it increases the size of the shadows and therefore provides more insights on the proportions of those obstacles.  On the flip side, the larger the shadows, the greater the “holes” in the survey data.

Interferometric side scan sonar provides a silhouette of a target, whereas MBES collect accurate measurements of a target. 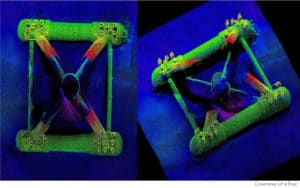 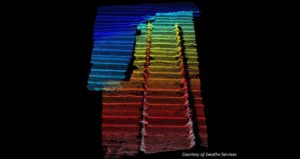